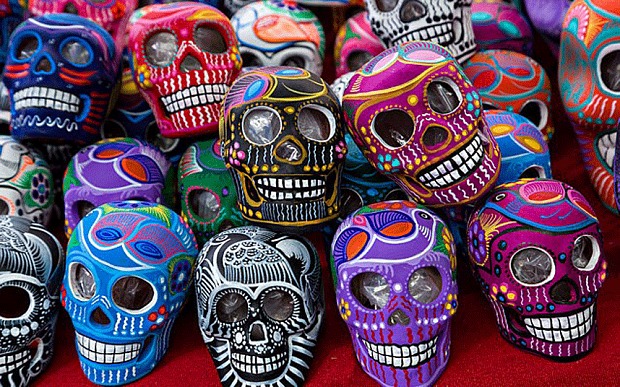 On November 2, Fontbonne’s Latino Hispanic Union (LHU) held an event to celebrate to Dia de Los Muertos, also known as the Day of the Dead. Through this event, they taught others more about the holiday and invited others to experience the festivities that come along with it.

Meghan Graf, the president of LHU, says that “It is a holiday celebrated in many different cultures, and it’s celebrated in different ways.” They decided to celebrate this holiday with the Mexican tradition in mind. The Day of the Dead is a celebration to honor the memory of those who have been lost.

Walking into the AMC, there were two tables that sat in the middle of the room. One table had a poster chock full of information about the Day of the Dead, such as the tradition of decorating altars in the honor of lost loved ones. There was also a basket of Mexican bread that is called “pan dulce,” which translates to “sweet bread” in English. This bread is important to the holiday because it is left on the altars that are decorated.

Between the two tables and on a wall, there was a big piece of paper that gave people the opportunity to write down the name of someone they wanted to pray for or that they missed. The other table had people circling around it as they learned how to make paper flowers, which are also an important part of the holiday.  Although everyone was making paper flowers with all different colors, traditionally the paper flowers are made to look like marigolds. Marigold flowers are thought to draw spirits toward them because of their bright colors and scent. The altars that are made during the holiday are usually decorated with marigold flowers, real or paper.

It is a day full of meaning that focuses on the remembrance and celebration of lost ones. It holds an important reminder that death does not end life, but new life comes from death.

0 comments on “Celebrating the Dead with LHU”