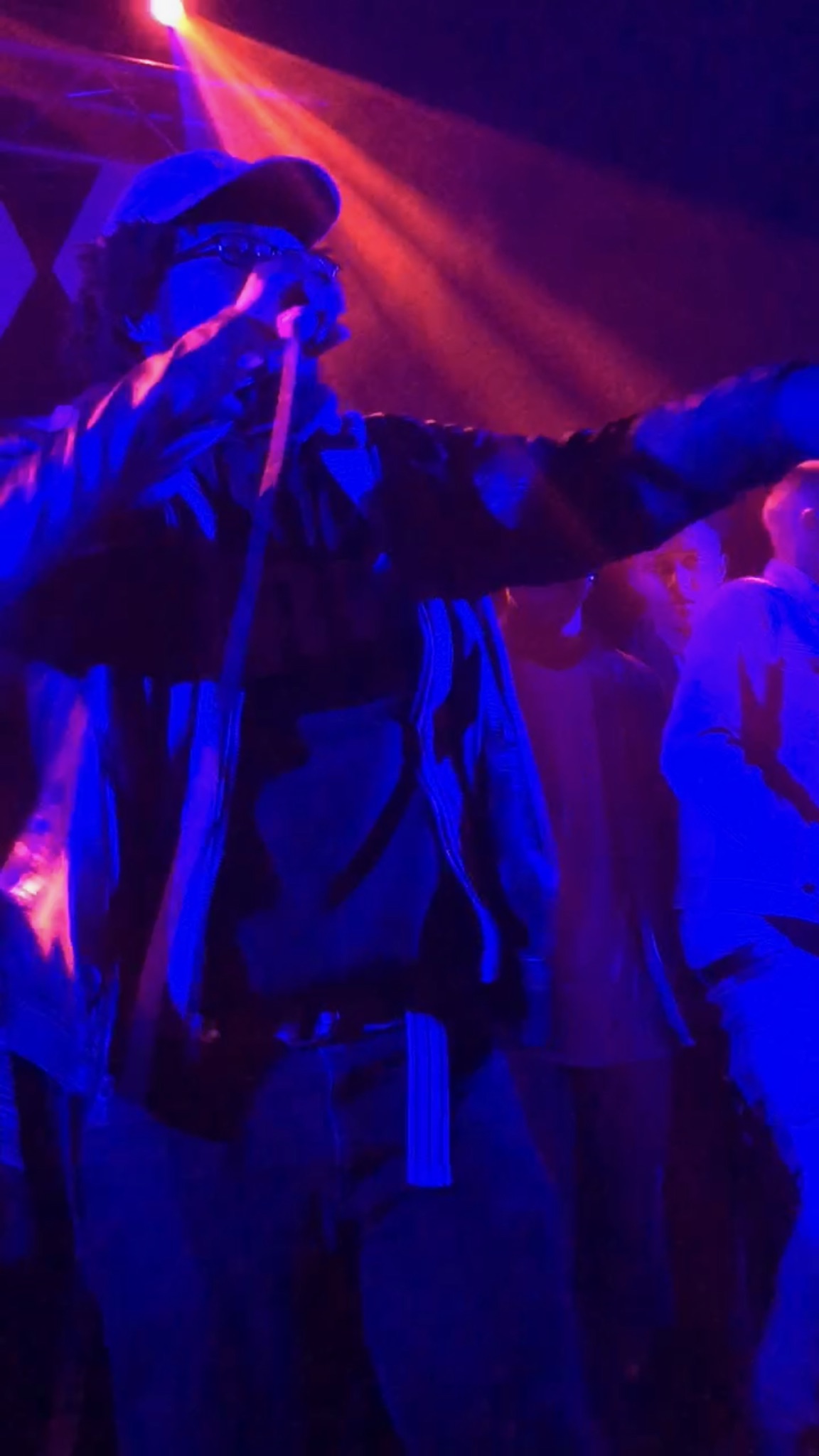 When you enter the second floor of Medaille Hall during the moonlit hours, you’ll likely find a serene atmosphere, typically undisturbed. When you head westward down the hallway, the many dorm room doors and the stories that take place behind them begin to blend together in overwhelming fashion. As you reach the end of the hallway your ears will prick at the suspected presence of a faint bass line—repeating—quiet enough to not disturb, yet ambiguously evident. No raucous voices or party-like atmosphere accompany the repeating rhythm—just a focused set of eyes and ears working his random dreams into a reality.

The sound’s source lies behind a door you would likely miss if you weren’t determined to find it. Behind it lies the “Random Dreams Studio.” This is where the layered bass lines and complex drum patterns bleed clearly out of a pair of KRK RP5G3 speakers. The room itself is incredibly claustrophobic with the life booming out of the speakers. A laptop feeds these speakers as a hoodie laden virtuoso behind the keyboard continues to fuel the fire.

Behind the music is Matt Austin, a junior at Fontbonne. As a seasoned producer/DJ/rapper/singer, Matt has contributed to the music genres of electronic dance music (EDM), Rap, Trap, R&B and all of the grey areas in between. All of these different sounds stem from his middle school hobby of designing his own video games. When designing these games, Matt wanted to create his own soundtrack. “I was afraid of getting sued for using random music from YouTube or a song by Jay Z so I was like ‘well, I guess I have to start making my own [music],’” explains Matt.

What started off as creating Nintendo-esque background music soon led to him dabbling deeper into music meant for the foreground. “From there I slowly dropped making games and slowly started making more and more music and from there it just evolved.”

With his musical roots planted in the electronic genre, he grew more into EDM as he pursued music on his own. After experimenting and getting a better grasp of his musical creations, Matt compiled his first mixtape of EDM style songs entitled “Random Dreams to Reality.” Up to this point, Matt had not thought of a proper stage name to release his music under. He decided to stick with simplicity. Adopting the title of his mixtape as his own, he began releasing music under the abbreviated title RDTR.

On the topic of his current stage moniker(s), it’s become a little complicated. When scrolling through his SoundCloud profile you’ll encounter a frequent feature, HNY BDGR, like the animal. If you dig even deeper you’ll see reoccurring names, such as Poppy Seed Johnson (P.S. Johnson, for short) and Orygmy (pronounced like the Japanese art of folding paper and stylized “o r y g m y”), listed as frequent features and collaborators with RDTR. These aren’t good friends of Matt Austin’s; every single one of them are him.

“I wanted to do a Madlib and Quasimoto type of thing,” he explains. In a bit of a split personality-like approach, Matt is able to channel different personas and energies through each of his aliases. “I wanted to have different layers. HNY BDGR is the soft one, like the Drake type. Orygmy is the introspective—like deep-thinking. P.S. Johnson is just rapping about anything like some ‘Gucci Gang’ type of stuff.”

However, his multiple pseudonyms have brought some headaches in his online presence as he’s progressed in his college career. “People will start following my aliases, like HNY BDGR, and be like ‘oh I like him.’ Here I am like, ‘shoot,’ I really don’t want to switch up names now.” Matt explains how he would rather let the aliases naturally fade away and continue to push his RDTR moniker into the spotlight.

In today’s age of technology-based music, Matt has put many hours into the world of computers, and he utilizes these skills to his advantage. On his laptop he is able to switch his operating system from a Mac to a PC in the click of a few buttons. With this he is able to utilize both Apple’s Pro Tools software and Windows’ FL Studio on the same device. Many music producers often rely on attachments such as mini-keyboard pianos and drum machines to help them. With all of his experience and work with computers in his lifetime, Matt insists on using simply the tools he has at hand: his keyboard, his trackpad, and his mouse. He avoids shortcuts that might cause him to go outside of his own headspace and possibly compromise how personal his music is.

A fellow local rapper and frequent collaborator with Matt known as Wizzy Mac compares Matt’s work to a fine art form. “Watching Matt produce and engineer a song is like watching him paint a picture. He moves quick and produces high quality and studio-like music. I know he can help me make any track even better than I imagined it.”

With little classical training on traditional instruments, Matt is able to combine the sounds he has available on his computer screen into professional-grade material. His non-traditional methods have even affected how he uses real life instruments. “I’m so used to seeing the piano keys on a screen laid out sideways that when I use an actual piano I have to position my body all awkwardly to have it the same as when I’m on my laptop.” When it comes to the final nitty-gritty sonic adjustments, Matt handles all of his own mixing and mastering as well.

After making music for what is nearing a decade now, Matt estimates that he has made well over 1,000 songs. “From the beginning of teaching myself there have been a lot of rough takes, especially when I first started rapping. I thought I was going to go in the booth and spit some hot stuff, but instead I was in there spitting nursery rhymes. Most of my music will never see the light of day.”

When asked how often he is able to work on music, Matt immediately clarifies that no matter what, “school is first.”

One of Matt’s professors at Fontbonne, Dr. Tian, explains Matt’s work ethic in the classroom. “Matt is a very diligent student! He always engages in classroom activities and completes his homework on time. He studies Cyber Security and this is not an easy major. But he has always done well in his classes.”

As a Cyber Security and Computer Science double major, Matt has a rather full course load at 18 credit hours this semester. Matt’s days are spent in the classroom or studying. However, once night falls, Matt enters his creative zone. “I’m a night owl. I’m nocturnal. Most of the stuff I record is from 8 p.m. to 7 a.m.”

Matt insists that he works on music daily and has been on this regiment since starting his college career at Fontbonne. With a fairly consistent production schedule, Matt also sticks to other routines and rituals when creating. “I was used to recording at home and being comfortable. Coming here my freshman year I had two roommates. I was still making my beats but as far as my vocals I made them less because I like to record alone or in the dark at night.” His freshman year was primarily focused on the beat-making side of production, while his sophomore and junior years have been a lot more versatile since he has his own suites in the dorms.

Matt’s vast repertoire has taken him beyond his dorm room and SoundCloud. He’s had opportunities to showcase his music and DJ abilities here at Fontbonne, in a couple of local shows in St. Louis, and in a few shows in Columbia, Mo. His music even earned him the opportunity to travel to Miami to put his talents on display. Matt considers his trip to Miami a “major accomplishment” in his music career. The gig turned into a family vacation for him, as his mom and brother came along with him with their travel and lodging paid for. It ended up being a bit of a “free vacation,” according to Matt. “I was psyched because it was something I did. I went from sitting down at my computer to being able to fly somewhere. That was a cool experience.”

Inspired by Chris Rock’s movie “Top Five,” Matt attributes his musical inspirations to Flying Lotus, Kanye West, the late Avicii and Lauryn Hill. Unable to fulfill the daunting task of cementing a definitive fifth spot on his list, Matt capped it off at four. He explains that if you were able to “mash together” those artists, you have his artistry.

Matt plans to continue making his music in the future but wants to put a larger focus on promotion and marketing in order to get a better following both within St. Louis and beyond. He plans to see his music finally come “full circle” in a couple of years, after his enormous repertoire is pushed out to the largest audiences possible. For now, he remains in his dorm room during the night hours creating a variety of tunes, such as the unreleased groovy, trap-influenced beat he nonchalantly titled “Salsa.”

Matt’s easygoing attitude should not be mistaken for being uncalculated. He is learning along the way, through trial and error. Matt has been creating his music on his own, and he intends to continue in similar fashion.

“No one does it better than yourself,” he professes with conviction.