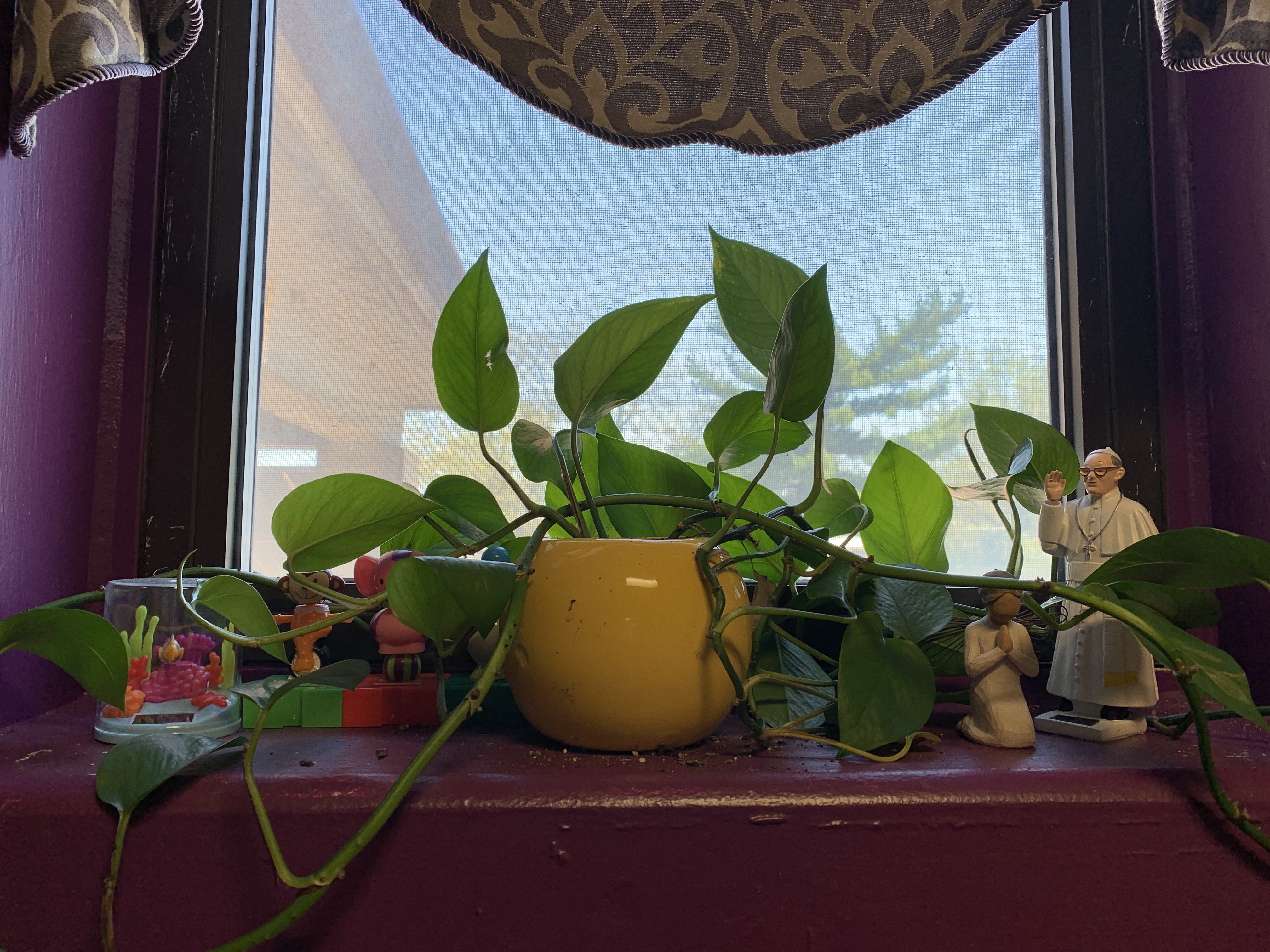 Even if you are not familiar with her name, you can usually spot a Sister of St. Joseph of Carondelet (CSJ) riding around Fontbonne in her motorized scooter, giving out candy to people to brighten up their day. Who is this woman you may ask? Her name is Sister Linda Markway. She has been at Fontbonne for five years working as the Director of Mission Stewardship and also in Campus Ministry. Her bubbly personality and genuine smile light up our campus. This is why Sister Linda is a perfect person to interview as a Human of Fontbonne.

Sister Linda decided she had a calling to be a sister right after she graduated high school. After about seven years of her serving in a religious community, she left the religious life and became an educator. She discussed with me a major event that drastically changed her life.

“I met Gary Morse in the late eighties and early nineties. We were going to get married on October 12th, 1993. We were going to adopt 10, 11 and 12 year olds. Life was going to be good. That is what women were supposed to do. Unfortunately, a good friend of mine passed away and (had previously) told me I should think about becoming a sister. I went to her funeral in ’92 and all of a sudden I couldn’t get married. To this day, Mari, I have no idea what that was all about. It must’ve been the Holy Spirit. People thought it was wedding jitters. Luckily, I had a man who wanted me to have freedom. He was willing to give me space to process everything. I reflected on becoming a sister and after attending a Come and See weekend, I came to the Sisters of St. Joseph. I was hooked. I entered in ’96.”

“No, I don’t. People often ask me that. I tried to keep a relationship which was unfair to him. I found happiness in something that was not our relationship. My brother said he had never seen me glow so much as I did the day I received my ring for joining the CSJ’s. Gary does stay connected with my younger sister because they became good friends. He never got married and he lives in San Antonio, TX. We were going to get married in Texas and ride into the sunset.”

What are some misconceptions that you think people may have about the religious life?

“We are sad and lonely. We aren’t very much fun. How could we be? We don’t have much money and we don’t have a sweetheart. We pray all the time. We do pray, but like how everyone else is called to prayer. I think people believe we are holier than others, but we are just as human and as holy we as can be again as others are.”

What brought you to Fontbonne?

“I worked at St. Louis University as a development assistant originally. I left that ministry. I was intrigued by the university’s mission with the CSJ’s. My job was to be the face of Fontbonne for alumni. If alumni were sick or were struggling, my job was to reach out to them. If an alum had an issue with Fontbonne, I would speak to them directly and see what I could do. I have been here for 5 years.”

“Fontbonne Day. For me, with my first experience with Fontbonne Day, I was so impressed. The whole university shut down just to provide service. What a wonderful way to serve the dear neighbor.”

You always have candy in your scooter for people around campus, what is your favorite candy?

“I actually don’t even like candy that much. I prefer dark chocolate. None of it tempts me!”

I’ve heard that you done a lot of traveling within the U.S., how many states have you been to?

“All 50 states! I liked to travel and be in different places. I went to where the discerning women were located at.”

What is the one thing you have to have in your refrigerator?

“Diet Dr. Pepper. I always have to have a cold can in my fridge.”

Go to song for karaoke?

“We Are Family by Sister Sledge.”

Favorite song to dance to?

“Oh! Twist and Shout by The Beatles.”

What was your first job?

“I worked at Hobo Bakery in Jefferson City, MO. I worked around sweets so much there and that’s probably why I don’t like sweets now. I loved talking with folks there.”

What was the first thing you did this morning?

“Turn the alarm off and give me five more minutes of sleep! When I awaken every morning, I thank God I am alive.”

If you could have any superpower, what would it be and why?

“I would love to have an invisible cape. I would love to be present in some of those spaces where I can’t be. I would love to check in on people without being noticed. As a sister, I don’t want to influence people a certain way. I’ve heard people say, ‘Well, Sister knows how to do it better and say it better than the rest of us.’ It’s not true.”

What has been your favorite memory of 2019 so far?

What is something people don’t know about you?

“I like bucket lists. Most of them are pretty scary. I’ve jumped out of a plane, I’ve bungie jumped, and I’ve cliff dived. I’m a daredevil. I’ve also always wanted to be a Country Western singer. I used to play guitar a lot. I didn’t want to be Dolly Parton, but you can hear my country twang come out sometimes at Mass!”

Can you describe St. Louis in three adjectives?

Best advice you have ever received?

“The main thing is to keep the main thing the main thing. Don’t sweat the small stuff. Know and keep your focus. My mom always said a prayer, ‘God help me to remember that nothing is going to happen to me today that You and I cannot handle together.’”

“Hospitality and a welcoming presence.”

What is your advice to Fontbonne students as we near the end of the school year?

“Take good care of yourself. Good self-care is the best form of prayer. Just breathe. Eat some ice cream. Take a break. All of this school work is not near as important as your well-being. It hurts my soul to see these young people not getting rest, not eating and just a nervous wreck because of pressure.”

If you see Sister Linda around campus, feel free to introduce yourself to her. If anyone knows her personally, they know she will gladly have a conversation with any stranger on campus. Sister Linda manages to spread positively and light to our campus. She is committed to serve the dear neighbor through her work with other humans of Fontbonne.