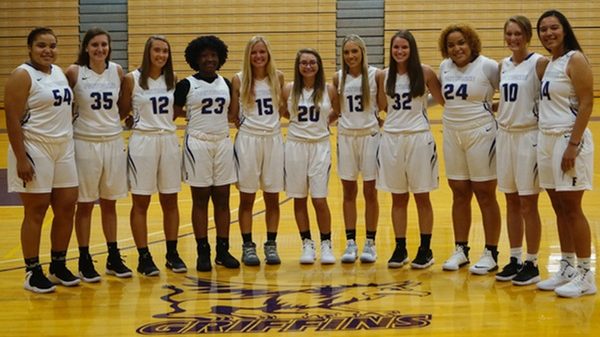 The Griffin’s women’s basketball coach, Maureen Sias, is already preparing for this 2019-20 season. Due to her fast paced, intense coaching style, Fontbonne University’s coach wants her players to be in exceptional shape for the beginning of the season. Their 1st preseason game is just around the corner on October 29th against Mizzou.

Consequently, the girls are being pushed to their utmost limits early this fall, with strength and conditioning twice a week and practice three times a week. That’s a total of five practices a week, in addition to juggling work and school. This immensely demanding lifestyle creates the mental toughness Coach Sias wants her players to develop.

The team had a few extremely influential players who graduated last year, so for the upcoming season there are two starting spots that need to be filled. Will a freshman step up? Or are there returners who aren’t going to give up that easy? Only time will tell what Sias’ starting line is going to be. However, she explains the entire team has been working incredibly hard in the off-season so it’s going to come down to who’s able to pull through and be in top shape when it comes game time.

After the team lost two starting seniors last year, Rylee Stafford, junior starting guard, is excited to play with almost an entire new squad. “The freshman class is going to take up a majority of the team and they’re going to be a force to be reckoned with,” Stafford says.

There’s a whopping six new freshmen on this year’s roster, and a few of them aren’t even from the Midwest!  This geographical difference could bring an entirely different playing style for the team to adjust and work with, in order to excel against their competition.

Coach’s viewpoint on players coming in from out of state is nothing but positive. She knows this team can accept the challenge. “I enjoy having players with all different mindsets and ambitions for the game, it brings a unique perspective and keeps the team on its toes,” Coach Sias says.

Sias wants more than just a team. She wants girls who can do it all.  Aspiring for an ambitious team 3.4 cumulative team GPA goal for academics, and a team athletic goal “to not only make the conference tournament, but win it,” this team is going to need to be in fantastic mental and physical shape. Coach has faith, though. Last year the team came incredibly close to getting 5th in the conference tournament but fell just short, losing 60-65 to Spaulding in the final.

This year, however, in relation to the other teams in the St. Louis Intercollegiate Athletic Conference (SLIAC), Fontbonne is looking like a promising contender for the conference championship. Stafford says “with the other ten schools in the conference losing either star players, or a lot of players in general to graduating seniors,” Fontbonne’s women’s basketball team might just have what it takes to take the title. I believe this only to be possible if the team can execute Coach Maureen Sias’ plan for the season effectively.

Check out Fontbonne Women’s Basketball Schedule for upcoming games and information regarding the 2019-20 season.