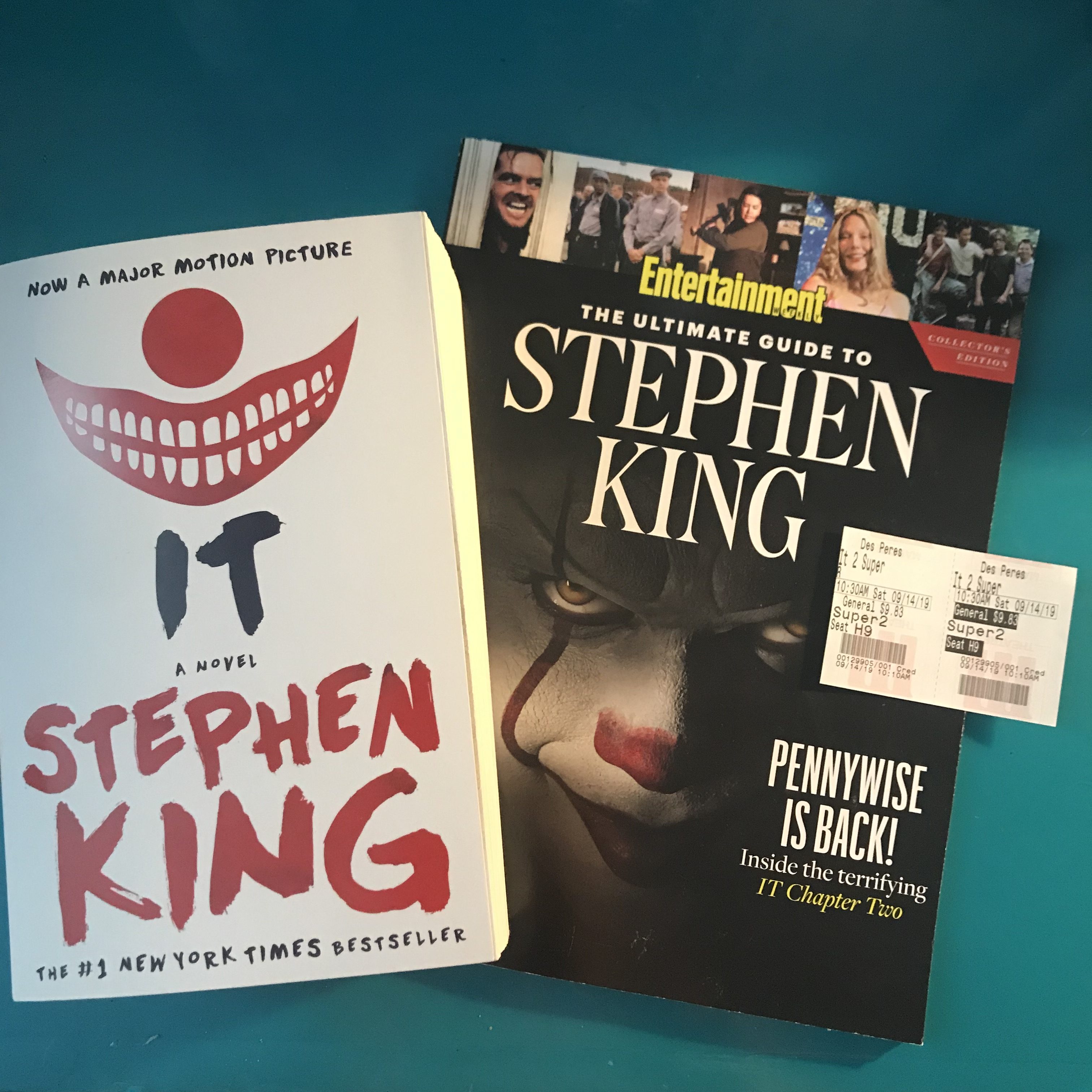 IT: Chapter 2 is the highly anticipated sequel to the current king of horror, IT (2017). These movies are based on Stephen Kings novel IT published in 1986, which is quite the read at roughly 1,100 pages and is also a #1 New York Times bestseller.

In 1990, director Tommy Lee Wallace created an adapted mini-series from King’s novel that was aired in two three-hour parts. It was aired on November 18th and 20th 1990 and attracted about 30 million viewers. The mini-series received an award for Outstanding Music Composition for a Limited Series, Movie, or Special. It rated decently but nothing compared to the two new editions created in the past few years.

The first IT remake was released on September 8, 2017 and had a gross revenue of $700.4 million. It won an MTV Movie Award for Best On-Screen Team for their actors playing The Losers Club. The Losers Club was made up of actors Finn Wolfhard, Sophia Lillis, Jaeden Lieberher, Jeremy Ray Taylor, Chosen Jacobs, Jack Dylan Grazer, and Wyatt Oleff. This excellently cast band of misfits makes the movie what it is. This movie is in the horror genre, but these teenagers bring an innocence and comedic air through their friendship and sarcastic remarks, that eases the tension in the more twisted scenes of torment they receive from It/Pennywise. It/Pennywise is played by Swedish actor Bill Skarsgård, who is part of a family of very successful actors. Skarsgård creates a Pennywise that captivates and can leave viewers haunted for weeks after watching the movie. This first movie of the recreation of King’s book set the path for IT: Chapter 2 to take over the box office just as this one did.

IT: Chapter 2 was released in an atmosphere of excitement from fans of the first remake on September 6, 2019. This next chapter of IT grossed $450.6 million its opening weekend. When the second chapter was announced to be in production, fans of IT went wild. They went even crazier whenever the teaser trailers and then official trailer were released as they now got to see what was in store when they went to theaters that September.

The adults casted as the older versions all bore a striking resemblance to the kids who had played the Losers Club teens in the 2017 movie. Wolfhard’s character was played by Bill Hader, Lillis’s character by Jessica Chastain, Lieberher’s character by James McAvoy, Taylor’s by Jay Ryan, Jacobs’ by Isaiah Mustafa, Grazer’s by James Ransone, and Oleff’s by Andy Bean. Each of the adults playing these older versions of the kids had extensive time with the teens who played the Losers to learn how they envisioned their characters as adults. One of the methods used for their character development of the adults were letters written by the teen actors about where they think their adult-selves would be emotionally and how they handled life now that they are older.

Bill Skarsgård continues as It/Pennywise in the second movie, and, once again, nails it. Pennywise is a vision of anger as he comes back to Derry, the town in which the movies are placed, to get revenge on the Losers for weakening, and almost defeating him, all those years ago. The acting, effects, storyline, romances, etcetera are all pulled together to create a great movie, but did IT: Chapter 2 live up to the hype?

From my perspective, IT: Chapter 2 almost lived up to the hype. The movie seemed to center around the now-grown Losers reliving their past, more than Pennywise attempting to get his revenge. The roughly three-hour movie spends the first hour and a half showing the Losers reuniting in Derry, and each of them reliving their past experiences in the previous attacks from Pennywise when they were young. We see new scenes that give a deeper look at what each of them went through in their time apart in the first movie. It helps show more of why each character has grown into who they are now that they are older. Even though they can not remember what happened at that time, until they return to Derry, they are still somehow scarred and molded by these past experiences. While I enjoyed this part of the movie, it could have been presented in a way that was quicker and didn’t drag on.

Another thing that kind of drained the movie’s appeal was the intense CGI work done to actor Finn Wolfhard’s face. Wolfhard was around fourteen years old when they shot the first movie, so now that he is sixteen, his face looks more matured. Wolfhard’s whole face looks off with the CGI: his eyes are enlarged by his glasses, his head looks a bit misshapen, and they’ve digitally erased the freckles on his cheeks. I completely understand needing to alter some but this was very over the top.

The scene depicting the demise of Pennywise in the final battle between it and the Losers did not deliver what this viewer, and others, were expecting. Instead of an on the edge of your seat, gory, thriller, the scene somewhat reminded me of a cheesy Boss Battle in a video game, but instead of them defeating Pennywise with actual physical fighting like their first battle twenty-seven years earlier, they defeat Pennywise by insulting it until it shrinks down to fit in their hands. Then they all crush it’s heart in their hands, and that’s that. I don’t believe that final battle had the physical intensity that was expected by viewers.

Despite all this, I still enjoyed the movie and thought it was a great take on what Pennywise’s revenge on the Losers might look like based on Stephen King’s novel, but it was still laccking in speed and overall thrill. It is definitely worth watching, and a good follow up to the IT of 2017; however, to me, it still did not quite live up to all the hype.